John Lott understands distributed security and the decentralized threat, help others to do the same.

How To Beat Terrorism by L. Neil Smith

Away, way back in 1977, when I began writing my first novel, _The Probability Broach_ (still in print, after four decades), I was regarded as something of a nutcase because I argued that American society would be a much better, safer place if everybody who wanted to, carried a gun. I was by no means the first to do so, nor was I the only one at the time, but, except for Robert A. Heinlein, Elmer Keith, and the ghost of H. Beam Piper, I often felt very much alone in my simple, straightforward, common-sense advocacy of exercising one’s natural rights under the Second Amendment to the Constitution. Now, of course, forty years later, armed self-defense has become a social movement. The degree to which I share responsibility for that is debatable, but I am proud of any part I may have had in it.

Last weekend (no, I am not changing the subject) was a pretty lousy one for peace and civil order in the United Kingdom of Great Britain. Egged on by various evil shamans (one of them in the States), Islamic terrorists employed an automobile and big knives to wound and murder dozens of innocent individuals who were trying to enjoy a warm summer evening—in a near-Arctic climate that doesn’t offer many of them—and whose only “crime” was that they did not choose to follow the benighted religious precepts of a 7th century Arab merchant-trader. END_OF_DOCUMENT_TOKEN_TO_BE_REPLACED

END_OF_DOCUMENT_TOKEN_TO_BE_REPLACED

The bravery of a homeowner put an end to the three-day long manhunt, Fitzhugh said.
The inmates had run through the woods to a home on Pruitt Road, near the rural community of Christiana.

“The homeowner was alerted somehow, he looked outside and saw the suspects trying to steal his vehicle,” Lt. Bill Miller from the Tennessee Highway Patrol said late Friday.

The homeowner called his neighbor and both men, each armed with a gun, confronted the fugitives… 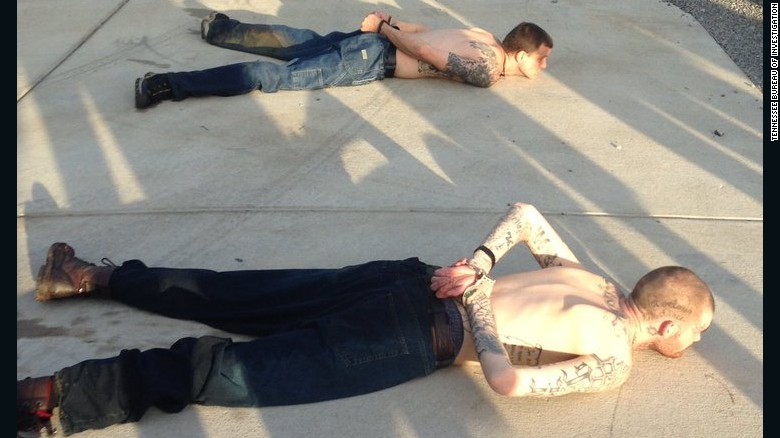 Ricky Dubose and Donnie Rowe after their capture.
Source: CNN

Really? “Showed no sighs of violence or malice toward others”?

What exactly would you call enforcing your shitty ideas on the public via the credible threat of lethal force?

Mr Orear said Mr Hodgkinson was “a passionate progressive” and showed no signs of violence or malice toward others, the newspaper said.

The Amazing Arrogance of the Paris Climate Agreement

It was December 12, 2015, when headlines in the world’s leading newspapers, in implausibly bold type, celebrated the “historic” agreement in Paris between all nations of the world to curb carbon emissions and thereby stop climate change: or so they said, as if elites get to say what is and is not historic.

The spin, like the agreement itself, was crammed down our throats. END_OF_DOCUMENT_TOKEN_TO_BE_REPLACED

END_OF_DOCUMENT_TOKEN_TO_BE_REPLACED

Trump administration lawyers are in an awkward spot of defending guns laws and opposing the 2nd Amendment…But the Justice Department under Trump has embraced the same position in this case that was adopted under President Obama: to defend strict enforcement of a long-standing federal law that bars convicted criminals from ever owning a gun, even when their crimes did not involve violence.

So sad to see those people stuck in the dark ages of reality, the future is distributed and if your security plan can’t keep up with distributed threats, you are in for a rude awakening that will cost lives.

Democrat Assemblyman Kevin McCarty (D-Sacramento) is pushing a bill to guarantee teachers will be unarmed and unable to shoot back should an attack occur — though there have been zero incidents or accidents with armed teachers in California. McCarty’s bill, AB 424, repeals school administrators’ authority to grant permission for teachers with concealed carry permits to carry firearms on campus for defense of themselves and their students.

You can’t make this stuff up.

Huffington Post writer Justin Curmi wrote in his article titled “A Revision on the Bill of Rights, Part III” that victims who use a handgun to kill an attacker are depriving that suspect of his constitutional rights, namely the right to a fair trial.

– The main problem with the notion of self-defense is it imposes on justice, for everyone has the right for a fair trial. Therefore, using a firearm to defend oneself is not legal because if the attacker is killed, he or she is devoid of his or her rights…

Love 3D printing technology, there are few things it can do, and the technology just keeps getting better.

WALTERVILLE, OR, MAY 12, 2017 – Delta P Design announced today that it has developed a .50 caliber machine-gun suppressor to add to its BREVIS® II family of suppressors. Using state-of-the-art Direct Metal Laser Melting (DMLM) 3-D printing technology, the BREVIS II is manufactured in a single, solid piece of metal with no welds or threaded seams for failure points.

So after almost 20-years of development and millions upon millions of dollars, the system finally dies.

In the latest twist of events to do with the 25mm XM25 “Punisher”, it appears the program is coming to a grinding halt after Military.com recently reported that the U.S. Army has completely canceled the program with Orbital ATK after almost two decades of development work. On top of numerous bureaucratic delays and issues that we’ve covered in an earlier post, the program was suffering from the delay of H&K’s delivery of 20 XM25s to ATK, of which the company sued H&K earlier for over 27 million dollars. Because H&K didn’t or couldn’t deliver the product to ATK, the U.S. Government canceled the procurement program completely about a month ago, with the news just surfacing now. Negotiations ensued between the government and ATK but these apparently could not yield an acceptable replacement in time or to satisfy operational requirements.

During this week’s NDIA Armaments Conference, Caleb McGee from Naval Surface Warfare Center – Crane conducted a briefing which detailed the test protocols used to evaluate the KeyMod and M-LOK weapon accessory attachment systems on behalf of the United States Special Operations Command. We recently published a FOIA released summary of that test which indicates that SOCOM selected M-LOK for use on the Suppressed Upper Reciever Group and Advanced Sniper Rifle programs. This briefing explains why they made that decision.

As part of doing his best to eliminate as many opponents as possible, he struck a deal with the Illinois Firearms Manufacturers Association (IFMA). In a recent article, author John Boch wrote that Jay Keller, IFMA’s lobbyist, traded that group’s opposition to the bill in exchange for a carve-out, removing Prairie State firearms manufacturers from the licensing requirements. To be clear, that means Illinois manufacturers who are members of IFMA, get a pass from everything. Guess who are the two major IFMA funding sources: Springfield Armory and Rock River Arms. The two 500-pound gorillas in Illinois’ gun manufacturing sector.

Trump’s Tax Plan Is Brilliant Politics and Even Better Economics

Donald Trump’s tax plan seems to mark a new chapter in his presidency, from floundering around with strange and sometimes scary policies (bombings, border closings, saber rattling) to focusing on what actually matters and what can actually make the difference for the American people and the American economy.

Under Trump’s plan, taxes on corporate profits go from 35% to 15%. They should be zero (like the Bahamas), but this is a good start. Taxes on capital gains go from 23.8% to 20%. Again, it should be zero (as with New Zealand), but it is a start. Rates for all individuals are lowered to three: 10%, 25%, and 35%. The standard deduction for individuals is doubled (politically brilliant). The estate state and the alternative minimum tax is gone. Popular deductions for charitable giving and mortgage interest are preserved. The hare-brained idea of a “border adjustment tax” is toast. END_OF_DOCUMENT_TOKEN_TO_BE_REPLACED

END_OF_DOCUMENT_TOKEN_TO_BE_REPLACED

There is much debate about where the U.S. economy is ultimately heading, but what everybody should be able to agree on is that economic conditions are significantly worse this year than they were last year.  It is being projected that U.S. economic growth for the first quarter will be close to zero, thousands of retail stores are closing, factory output is falling, and restaurants and automakers have both fallen on very hard times.  As economic activity has slowed down, commercial and consumer bankruptcies are both rising at rates that we have not seen since the last financial crisis.  Everywhere you look there are echoes of 2008, and yet most people still seem to be in denial about what is happening.

Beware: The Education Bubble will Burst

The number of defaulted federal student loans hit a new high in 2016: about 8 million borrowers have given up paying on more than $137 billion in education debts.

Three armed home invaders, all in their teens, are dead after choosing the wrong home in Oklahoma to rob this afternoon. They were met by the owner of the home’s son who was armed with an AR-15 rifle.

Does National Defense Require the State?

Gordon Tullock used to taunt anarchists by asserting that if the USA abolished its government, people would not have to worry about the Russians taking over the country because “the Mexicans would get here first.”

This little story actually incorporates a common objection to anarchy—namely, the idea that because, if a country abolished its government, other countries would not necessarily follow suit, the governments of those other countries would be free to, and would, simply take over the country that, lacking a government, also lacked an effective means of defending itself against takeover by a foreign power.

This thinking presumes at least two critical ideas: first, that defense of a population requires a government that rules that population; and, second, that if a government has the power to take over another country, it will do so. END_OF_DOCUMENT_TOKEN_TO_BE_REPLACED

END_OF_DOCUMENT_TOKEN_TO_BE_REPLACED

Deets said women like her are savvier today than ever before when it comes to their firearms and their fashion. “The demand is greater so we as women have stepped up our standards. We don’t have to settle for something that is tactical or ugly or cheap. We’re not willing to compromise fashion for function.”

“Juxtapose that over people we put in the military to carry M16s and other weapons with the intent of defending our freedoms and killing people,” said the Governor. “If they’re old enough to do that they’re probably old enough to get some training and carry a concealed weapon.”

Concealed Carry Reciprocity May Be Coming To Illinois

“Why would some go through 16 hours of training if they could mail order to get a concealed carry permit from Virginia or from Florida?” Asked Colleen Daley, executive director of Illinois Council Against Handgun Violence. “We want to make sure only the most qualified individuals… who’ve gone through the training and know what they’re doing are carrying firearms in our state.”

Really? So you think that the 16-hour course as mandated by Illinois is somehow superior to a mail order system?

Please list the facts that back up the claim that after state training people “know what they’re doing,” and then explain to the class why Illinois residents are too stupid to be able to do the same as those from Florida and Virginia who can mail order.